The sweeping changes of the Arab Spring demonstrated to the world how “the people without the guns are winning.” So declares the new documentary, How to Start a Revolution, a film that profiles the ideas and impact of Gene Sharp, a Nobel Peace Prize-nominated academic who can be described as the intellectual architect of non-violent, people-powered revolutions that have swept the globe over the past generation. Nearly 30 years ago, I read Sharp’s rather obscure but classic th 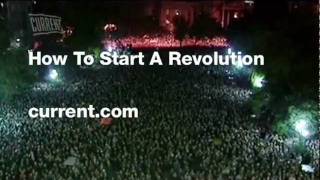 Road to Revolution is the crucial accompanying back-story to one of the most current and important films of our time. The film follows filmmaker Ruaridh Arrow on his dramatic journey, from funding difficulties to facing death threats in Tahrir Square to produce his documentary, How To Start A Revolution. Winner of Raindance Best Documentary award, Arrow's film gives an exclusive insight into the man, Gene Sharp, who has aided dozens of revolutions with his handbook on over

What the Catalans learned from Gene Sharp Sharp: the techniques to destroy the Spanish state (El Con

Reading the revolution: the book club that terrified the Angolan regime